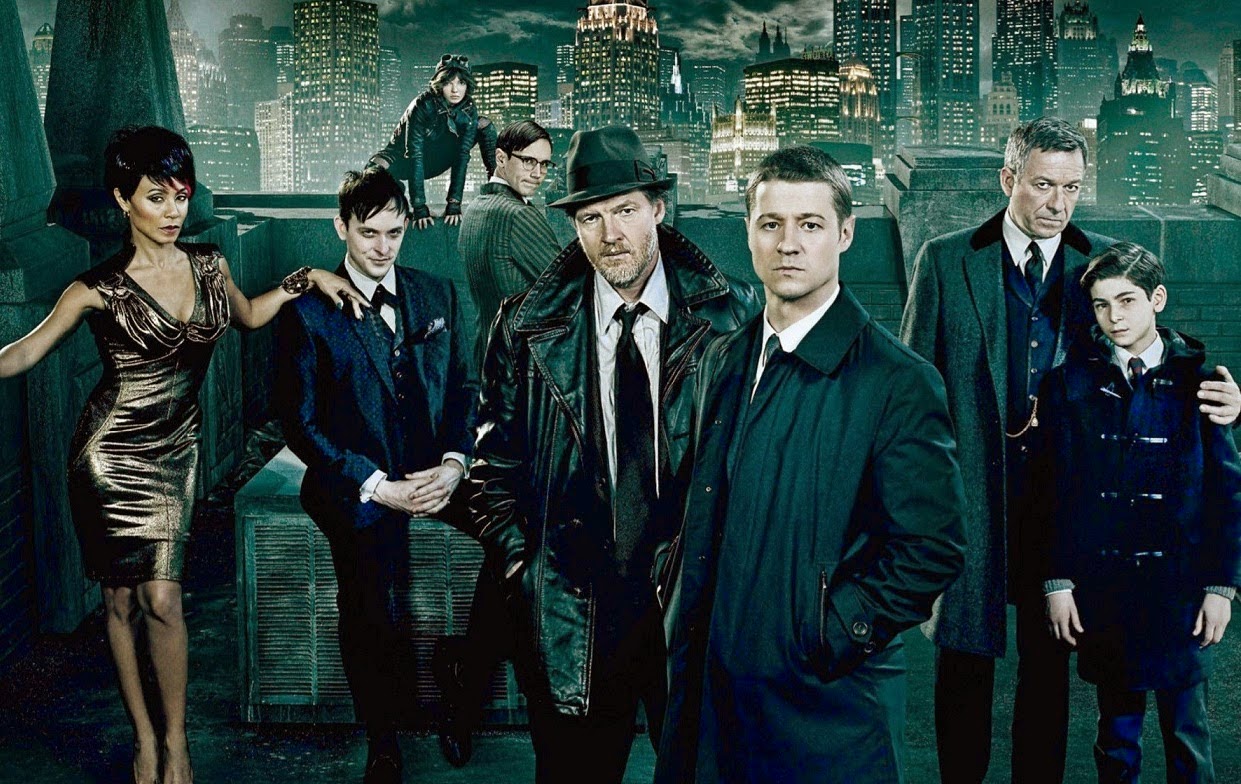 As the third addition to the current evergrowing DC Comics television line up, Gotham has certainly lived up to it's titular city's namesake - often corrupt with filth, but regularly saved by (several) dark knights in not-so-shining armour. Like the world's inhabitants, the writers of this FOX series seem to be tiptoeing in both the good and bad of artistic endeavours, and it's unclear as to how the show will progress come Season Two.

The greatest strength of the series has, and most likely will remain to be, the mob subplots. Seeing Don Falcone and Sal Maroni battle it out on the small screen is something we had never seen before in major non-comic Batman media, and it was a refreshing breather from all the forced supervillain escapades (more on that later). Most notably, Robin Lord Taylor has breathed new life into the Penguin; a slimy yet whiny sadist who is willing to do anything to get to the top of the criminal underworld, and is by far the standout of the show. Don't be surprised if you often find yourself wishing there were more scenes with this bird of prey.

The GCPD also rightfully has a large amount of screentime, and it's clear the writers love exploring the corruption within this false beacon of hope. Ben McKenzie plays a solid Det. Jim Gordon; he's far too angelic compared to the more realistic Jim we know from Batman: Year One, but as a main protagonist, we do see the struggles he goes through as he attempts to clean up the mess his fellow officers have made, and when he reaches his breaking point, it's oh so satisfying to see him both verbally and physically kick ass. It also goes without saying Donal Logue was a fantastic casting choice for the wise cracking, no bullshitting Harvey Bullock, who is a near bang on depiction of his Batman: The Animated Series and comic book iterations. Most of the show's best humour comes from him, and he's an excellent foil to Gordon's white knight perception of policing.

Going up against this bromance is the surprisingly heartfelt performances from David Mazouz and Sean Pertwee as a young Bruce Wayne and Alfred Pennyworth. The former brings a lot of humanity to the role, and although his progression from mourning orphan to full on brooding criminal investigator is unevenly paced, he's a very likeable kid who was able to pull off this mature role pretty well, considering the minimal amount of exploration Bruce's childhood has had in mainstream media. Pertwee is also a great choice for Alfred, with the character's military history often coming into play in the narrative, and his gruff English accent adding all the more witty charm to his performance. Considering that the first scene of the show depicted the Wayne's iconic death (excellently shot and edited by the way), these two had a lot of chemistry to pull off to convince us they could become a family, and they didn't disappoint - you may find yourself reaching for your Bat-Tissues every couple of scenes with them. 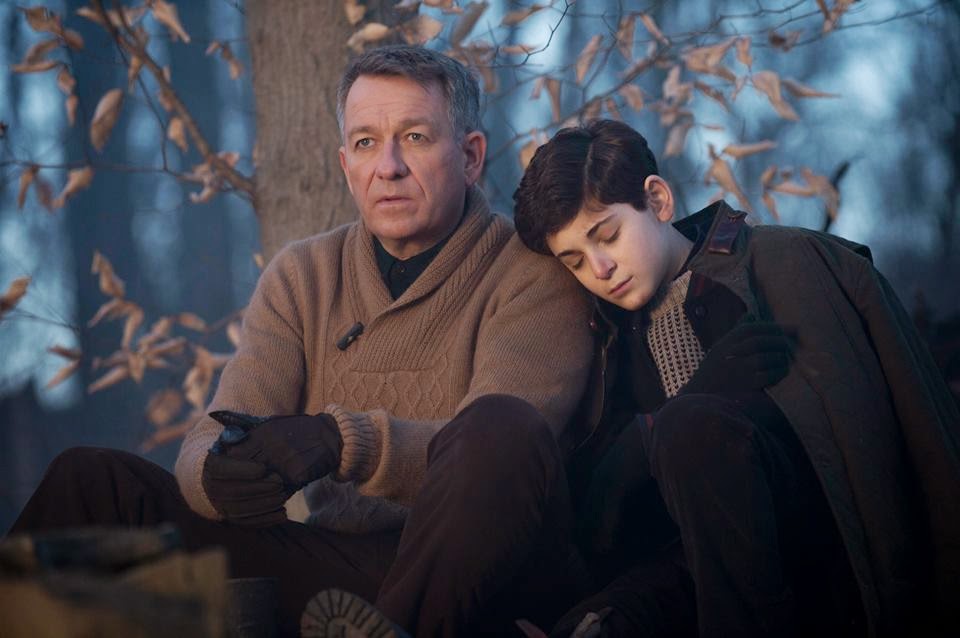 Ultimately, the show seems to work best when it's allowed to be subtle and able to fully explore the characters it depicts. Selina Kyle initially exerts far too many unsubtle feline mannerisms (going so far as to actually call herself Cat - really?), but over the course of the season, she is able to build a genuine emotional connection with Bruce and there's some excellent foreshadowing to their future involvement with crime. Sadly, the show is often far too goofy to stomach.

That is not to say I dislike silly superhero escapades - on the contrary, I can't get enough of them. However, the ratio in Gotham is considerably unbalanced, and often unintentionally leads to laugh out loud moments. Indeed, the more 'out there' concepts of the Batman mythos such as a man who kills people with weather balloons and another who drags a fridge down the street in a screaming Venom rage are greatly appreciated, but they tend to be depicted too over-the-top to actually be taken seriously; the frequent exaggerated performances of side characters do not aid this in the slightest, looking at you Barbara.

It's this that brings the show down a fair amount, in addition to forcing big villain names for the sakes of maintaining viewership. These aren't necessarily always bad, as Jonathan Crane Sr.'s origin episodes showed us, but these anecdotes nearly never play into the main story, which even then is loosely tied together by minor subplots. There was just too much going on, and even by the season's finale there were far too many questions left unanswered. You'll regularly scratch your head at how set pieces are introduced then quickly revoked later in the season, or just not addressed at all. 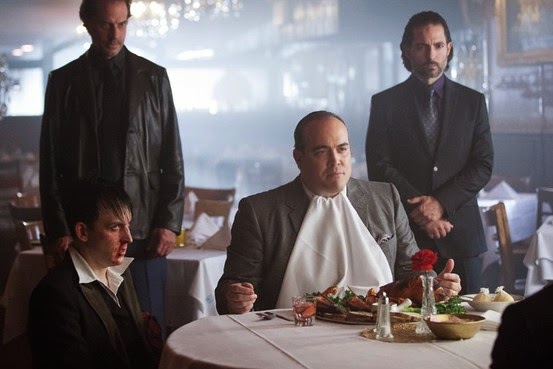 Perhaps most frustrating is that character development is incredibly sudden, often with little prior warning and, more annoyingly, intentionally fulfilling the needs the narrative structure. This is particularly the case for Edward Nygma and Barbara Kean, who were reduced to a lovestruck puppy and traumatised (and incredibly pestering) self-loather respectively. Similarly, Fish Mooney becomes slowly reduced to simply filling in airtime come the second half of the season, with an initially entertaining performance by Jada Pinkett-Smith degrading into an overconfident heterochromian who's only purpose is to complete Penguin's character arc.

In fact, it's clear to see that the show was forced to take a sudden turn after it was granted extra episodes. Villain rating traps were used to draw in mainstream Batman fans (looking at you 'Jerome'), several key characters such as Renee Montoya and the Mayor are written off the show, and CGI suddenly made it's way into the action. FOX seem to have been puppeteering the writers to meet the demands of the everyday audience, and thus the restriction on artistic freedom is heavily present in later episodes of the season. Not to say the second half of the series is wholly without merit (The Ogre for example turned out to be a surprisingly refreshing original villain); the show just seemed to need to conform to network standards moreso in those episodes. 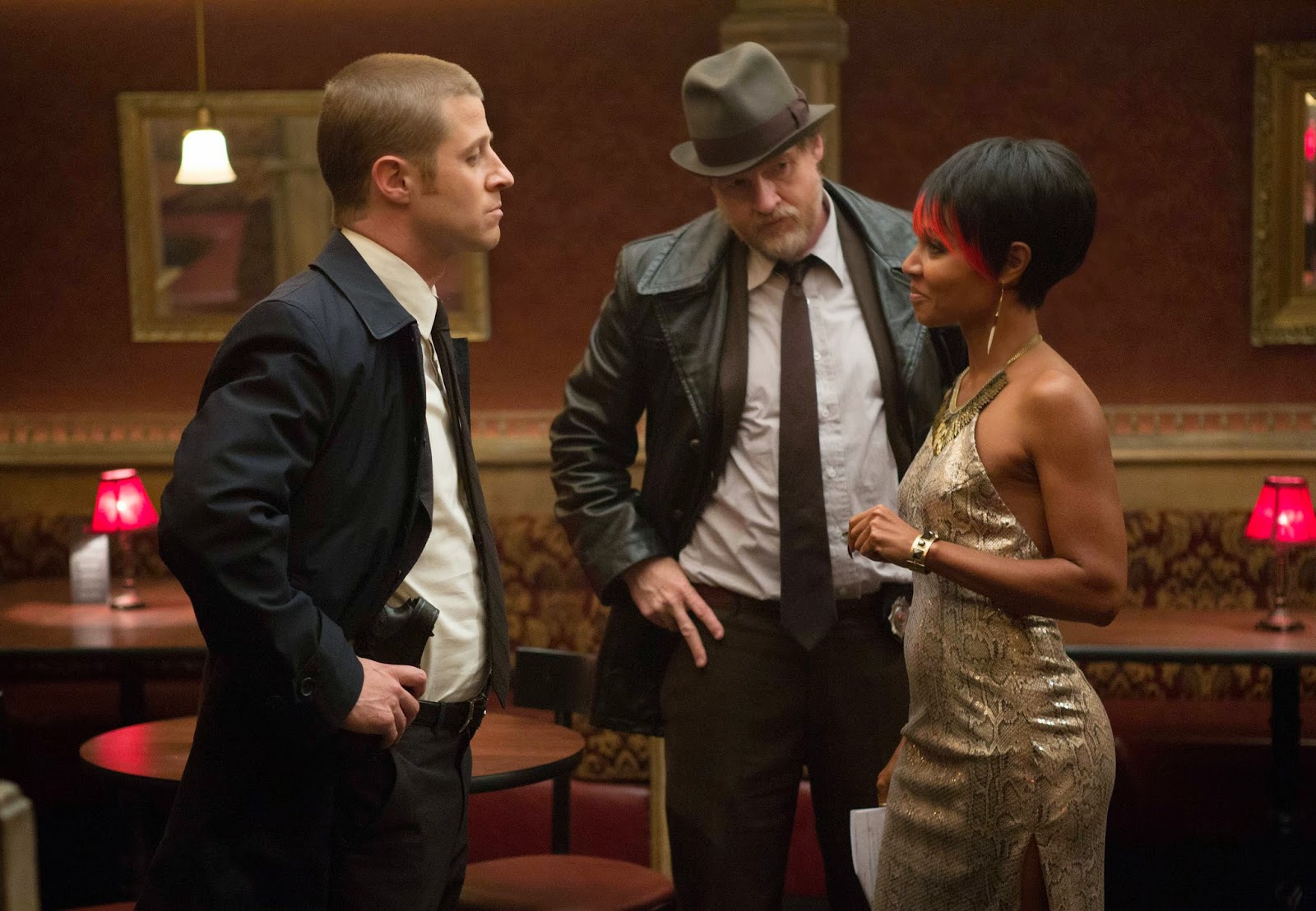 However, the show can be smart with it's audience, and the writers really do shine when they get to play with their authentic Batman toys. There's blink-and-you'll-miss-it references to classic tales such as The Long Halloween, The Killing Joke, and the aforementioned Year One, not to mention the stellar amount of C list characters the series has included, with Zsasz and Leslie Thompkins having pretty memorable roles. It's a shame then that this is often tossed aside for the sake of forced romances (four to be precise), dragged out 'dramatic' tension and goofy character mannersims.

In conclusion, Gotham is far from becoming a rival to The Flash's outstanding first run, but is also still above the trainwreck of Arrow's third season. Season One is can be best summarised as a board of executives attempt to please what they think mainstream viewers want in a Batman origin anthology, when they should instead be writing a Gotham Central adaptation. Needless to say, the story arcs of this first series are undoubtedly rushed, and we can only hope that the show will see better days when the next chapter continues these characters struggles in the one city that never truly sleeps.